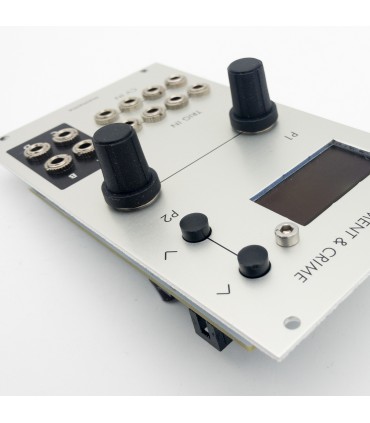 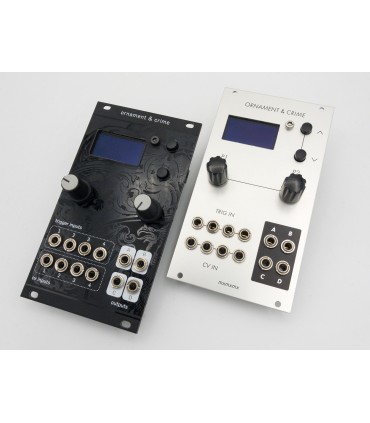 WE USE BEST PARTS ONLY
They are the circuit's heart. This is why we choose only high branded components to provide the best circuit result and durability.

the Ornament & Crime firmware is a collaborative open-source project by Patrick Dowling (aka pld), Max Stadler (aka mxmxmx) and Tim Churches (aka bennelong.bicyclist). It (considerably) extends the original firmware for the Ornament & Crime (o_C) DIY eurorack module, designed by mxmxmx.

the original o_C module was designed to perform a single function: a digital, quantising version of the classic analogue shift register (ASR).

there is still a quantising ASR (analogue shift register) function in the current Ornament & Crime firmware, now named CopierMaschine, but several other “apps” have been added, incl. quantisers, sequencers, LFOs, random/chaotic CV generators, and so on. These apps are selectable on-the-fly, without having to reboot the module or toggle the power.

the o_C module, and the firmware for it, break new ground as a polymorphic module: a generic set of inputs and outputs are provided, and the textual OLED display is used to permit re-mapping of these inputs and outputs for each app, and in some cases, for each of the four channels within each app. The o_C module does not purport to be the paradigmatic pinnacle of polypurpose — in fact, as noted above, it was originally designed to fulfil just one purpose (ASR) — but together with the much-expanded firmware for it, we hope it provides an interesting and useful early step in the evolution of such multi-purpose modules.

The apps currently available in Ornaments & Crimes are:

CopierMaschine is an enhanced version of the original quantising digital emulation of a four stage analogue shift register (ASR).

Automatonnetz combines Tonnetz transforms with a “vector” sequencer - it can be both a chord sequencer and a melody sequencer, but not of the usual kind.

Quantermain is a quad pitch quantiser for external voltages, with editable scales; it can do clocked (trigger-driven) quantising, or continuous quantising, with a latency of under 100 microseconds; it also features quad Turing Machines, May-Verhulst logistic maps or byte beats as optional, semi-random, internally generated CV sources.

Meta-Q is a dual-channel quantiser, similar to Quantermain, but also offering scale and note mask sequencing.

Quadraturia is a wavetable quadrature LFO, based on the “Easter egg” in the Mutable Instruments Framesmodule.

Low-rents is a dual Lorenz and Rössler (strange attractor) modulation generator, partially based on the “Easter egg” in the Mutable Instruments Streams module.

Piqued is a quad voltage-controlled envelope generator, based on envelope generator code from the Mutable Instruments Peaks module, but extending it with voltage control, additional envelope types, including re-triggering (looping) envelopes, additional segment shapes, adjustable trigger delays, and a unique Euclidean “trigger filter” which turns the app into a Euclidean rhythm generator which can output envelopes, not just gate or trigger pulses.

Sequins is a dual-channel step sequencer offering 4 “tracks” of up to 16 steps each; tracks can themselves be sequenced.

Dialectic Ping Pong is a quad bouncing ball envelope generator, based on a hidden mode of the Mutable Instruments Peaks module.

Viznutcracker, sweet! is a quad “byte beat” equation generator, which can be used as an audio source to generate curious but often interesting 8-bit noises and tunes, or which can be clocked by an external source to produce “byte beat” control voltage sequences. “Byte beats” were first described in 2011 by viznut (aka Ville-Matias Heikkilä).

Acid Curds is both a chord quantiser (sometimes called a “harmonic quantiser” for external pitch voltages), and a chord progression sequencer.

References is an utility app that outputs specific reference voltages on each channel to help tune or calibrate VCOs and other modules. It also includes a high-precision frequency meter and note tuner, a high-precision BPM (beats per minute) tempo meter, and a closed-loop calibration mode.

Product Details
Why Shop at Handmade Synthesizers
QUALITY
Made from best parts only
WARRANTY
All products come with 2 years Warranty
FREE SHIPPING
All orders over 500€ are shipping free
PAYMENT
We accept PayPal, Credit cards and Banking transfer
Related products

This message would not show out anymore if you click on the GOT IT or closing button.